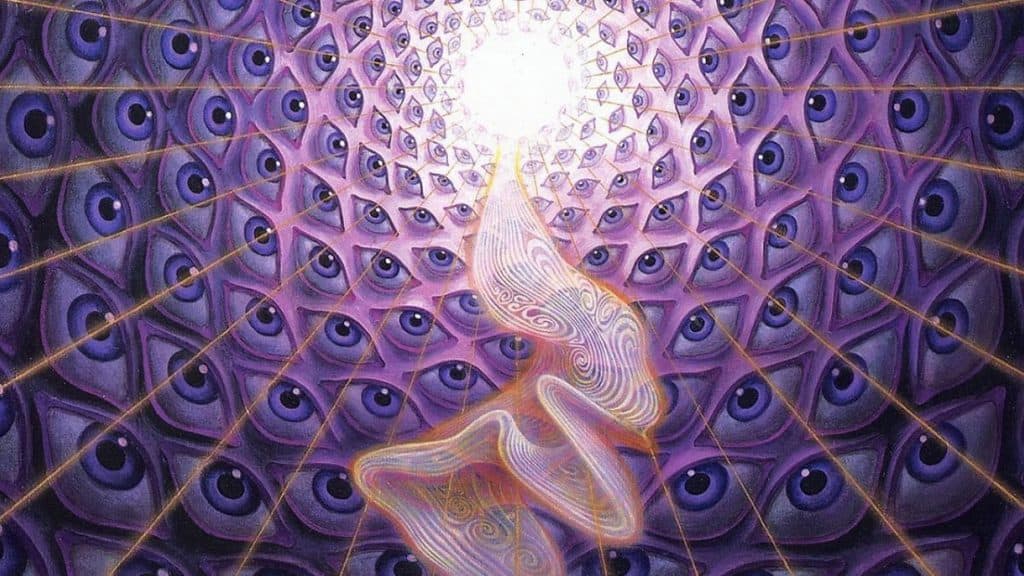 There I was, laying in the dark, as everything around me began to dissolve. It first started with my vision, objects became faint then like a dream dissolved into nothing, not even blackness. All the senses followed, and it was at this point I realized I was going MUCH deeper than I had the last time. “I” was in the formless realm. The last to go was the sense of self vs. other…all that was left was this subtle notion that there was perception, but not a perceiver. More of a matrix of vibrations all intermingling.

The infamous Heart Sutra, or Prajna Paramita, focuses on a state, and realization that is hard to sum up. The best we have is “No eyes, no ears, no nose, no tongue no body, no mind, no color, no sound, no smell no taste, no touch, no object of mind, no realm of eyes and so forth until no realm of mind consciousness.”

Other well documented experiences of Lao Tzu, Bodhidarma, Osho, and many, many others who have walked this path speak of this type of experience. In the cases mentioned above, it seems that this is more of a persistent experience, rather than the peak one that I had. They go on and on about the do-er dissolving, and that “no one actually becomes thirsty, just thirst arises, then there is a response to that notion, and resulting actions. No one is the actor.”

This was only my third time in this space. The last time I came close, I believe that I entered either the sixth or seventh Jhana. There was this experience of being vast, being the space surrounding all; the ability to look at self and other in complete equanimity, and analyze interrelationships from that higher perspective. It provided me with great insight, and allowed me to enhance a number of interpersonal relationships after the fact. The other two times were very short, and after long meditation retreats.

This more recent occasion, the experience was much more in line with the formless Jhanas, likely just the eighth Jhana. When I say there was the subtle notion that there was perception, it’s only from a place of knowing that there was phenomenon, vibrations, happenings. “I” wasn’t watching any of this, it was just happening. If there was any “I” it was purely in the experience of the happening, not in observing.

It really all came together (upon reflection later) when the notion of “thirsty” came into existence. There was no subsequent thought patterns that would have identified what “thirsty” was, just the sensations occurring. Subsequent to this, “arms” and “legs” materialized into existence, and began to move. Again, there was no knowing what was happening as a thing, just simply that things were happening. No confusion, or confirmation about the occurrences, either. The legs and arms proceeded to fill a water bottle, drink from it. There was the sensation of “satisfaction”, and subsequent moving back to the place to lie down.

In the moment, this experience is neither strange, nor not strange. It really is something else, to have experiences with absolutely NO identification with them as part or not part of a me, and NO subsequent thoughts about what just happened. In reflection, later, it all seems very very strange. I actually had no idea what to make of it until I later spoke with one of my teachers, and listened to the Heart Sutra again. Now there is an understanding, if a small one, of what it could be like to operate in the world from that place. Clearly, there’s a lot more work to be done, before that could be a viable operating model.

Thinking more on this experience, I wonder. How can one, i.e. this body, operate successfully from a persistent experience like this? Or are these kind of experiences not meant to be fully persistent, but just to better inform the relative ego, help it let go of things that it has now “seen” are not real, but pure fabrications? Given this experience, the only “real” things are these disparate sensations that seem to manifest all on their own, in reflection to other incoming sensations of the previous moment. A lot like waves in a pool of water interact, rather than there being an actor of any sort.

If that is the case, then is ANYONE ever actually acting? Or are we all just going about, bouncing around these sensation waves, pretending we are the actors? And if that is the case, what merit is there in transcending this pretend actor? Or does transcendence of the actor change / shift the way the waves of sensations reflect back out to “the world” in a positive way?

These questions are more just open loops for me, I don’t have the answers. I’d love to hear some thoughts on these if you have any!

Two Truths: The Superposition of the Ultimate and Relative Perspectives

#001: Drilling through the Illusion

The Zen Disease: Is crying for a lost one selfish?

FAILURE IS AN OPTION

How telepathy is possible: The Spirit as a Video Game Player